Which Foods can be 3D Printed?

3D printing technology has evolved and developed significantly in recent decades. Although it was originally used by the automotive industry and beyond, for prototyping, 3D printers have been refined so that they can be used by consumers.

Even though plastic has been used as a main raw material for a long time, in the last 10 years, due to innovations and intense research, the number of materials has increased significantly, now the following materials can be used: stainless steel, gold, different types of plastic with unique strengths and characteristics, but also carbon fiber.

However, one of the most desired and required applications of this device is its ability to print 3D using organic materials such as food. Just imagine: a machine that can 3D print food, offering unlimited possibilities in terms of food customization, more creativity and a faster and more efficient way to cook. A 3D printer in your kitchen can replace a microwave or other food processor. Do you feel like eating a hot pizza? All you have to do is press one or two buttons and it will prepare itself. 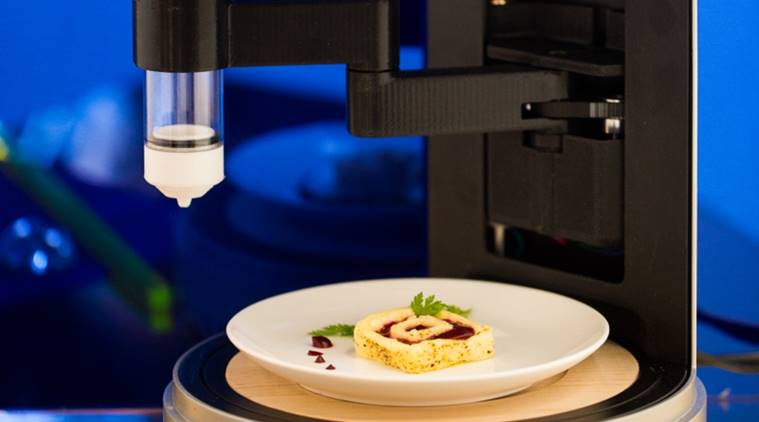 Of course, this technology is still in a rudimentary stage, but there are many companies which research and develop this type of printing.

What food can be printed in 3D?

Like the printing technology of objects and parts, food printing uses the same process, that of extrusion printing (Fused deposition modeling – FDM), which is the most widely used type of printing currently used. Through this process, an object is created using a filament which, through a heated nozzle, deposits layer upon layer of material in a well-established direction.

The same process is used when printing food. However, due to the current limitations of the devices, only foods that can be made into pasta, such as chocolate, purees, sauces or liquid doughs (such as pancakes) can be used as ingredients. Although the applications may be reduced, we must keep in mind that the technology is still in its earliest stages, and other types of ingredients such as cheese, bread dough and more are still being researched.

How is the food cooked?

Today’s 3D printers do not have the ability to cook food, but foods that do not require baking or heat processing, such as chocolate or simple desserts, can be created and consumed immediately.
Other foods, such as pizza after being extruded and filled, must be baked in an external oven, independent of the 3D printer. In mid-2010, a pizza machine was introduced to the market, using the same preparation principle as described above.

What is the advantage of 3D food printing?

3D printers have several advantages and benefits for the production and marketing of various objects. This also applies to food, as follows:

As with classic 3D printers, customizing food can be huge benefits for manufacturers and consumers alike. Because each person has certain nutritional needs and tastes, with the help of a 3D printer, it is much easier to customize food according to the user’s or customer’s specifications.

Being an automatic creation process, the recipes will be made exactly the same every time. This can be advantageous, especially in the case of restaurants, being essential when they want to maintain quality at the same high standard.

As with normal printing, the food must follow certain well-defined steps in order to have an excellent result every time. Recipes can be easily shared on the Internet, like the CAD sketches of normal 3D printing projects.

Although the technology is not at a very advanced stage, the demand for 3D food printing is very high. As time goes by and the market and research develop, this technology will certainly become more common and will eventually reach our kitchens.

Newer Can recycled plastic be used with a 3D printer?
Back to list
Older What types of 3D printing are there?