3D printing has become a very developed industry. From year to year it is more and more used and popular, due to the decrease in the price of devices, but also of raw materials. When we think of 3D printers, we think of plastic filaments, which are the most popular materials used. Of course, they are not the only ones, nowadays an increasing number of raw materials are used, including:

However, although the number of materials is impressive, plastic still remains at the top of the list, being used especially by those with machines that use the extrusion printing process (FDM). In this category, two of the most popular types of plastic are: 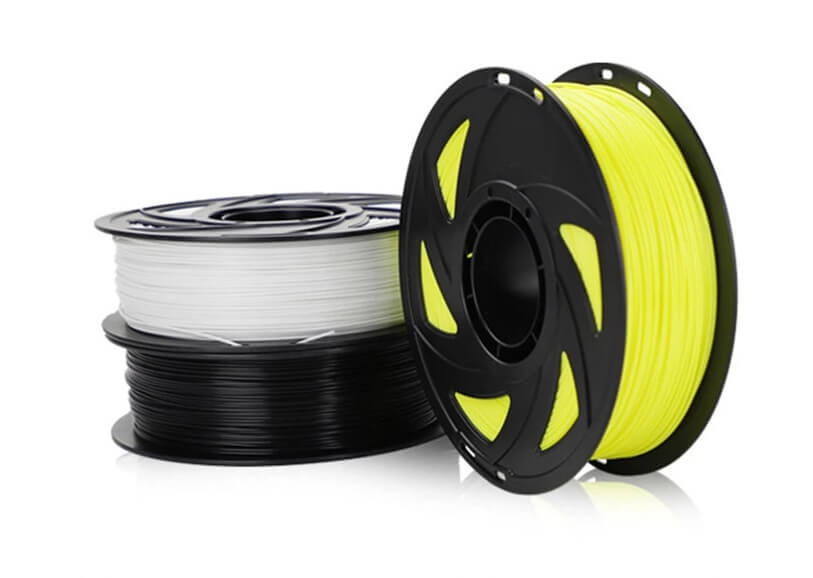 These two types of plastic are recognized for their ease of use as they are used by both beginners and experienced people. But the main question is: what is the difference between the two? To answer this question, we must first introduce them.

PLA or polylactic acid is the most commonly used material by regular users. It is a material created by mixing vegetable starch (obtained from crops such as corn) with certain chemicals.
Its design makes it biodegradable, which can be quite an advantage from an ecological point of view. Although it is biodegradable, PLA cannot be recycled, which can produce a significant amount of waste.

PLA is considered a suitable material for beginners. This is due to the ease of use and the low printing temperature. Although it is widely used, a disadvantage of this material is its low resistance to water, UV rays and its fragility.Being easy to use, PLA offers an exceptional quality of the finished object.

Being made of organic materials, it is a safe material to use. In the creation of objects, no toxic fumes are emitted as in the case of other types of plastic and it is safe to use with food.
When the object is finished, regardless of the plastic used, the parts will shrink during cooling. In the case of PLA, the reduction is minimal, much smaller than in the case of ABS or Nylon.

PETG (Polyethylene Terephthalate) is a polymer as popular as PLA. We can recognize it by the name of PET, being used quite often in the food industry and beyond. The difference is made by adding the letter G, which means that a modified ethylene glycol has been added, a change that lowers the melting point, which will make processing and 3D printing much easier.

One of the main advantages of PETG is that it has increased resistance to high temperatures, water and UV radiation, flexibility and high hardness. It is a little more difficult to print with PETG, as a higher temperature is required, compared to PLA. It is safe to use in contact with food.

When cooling, PETG shrinks a little more than PLA, but not as much as ABS. Compared to PLA, PETG is not biodegradable, being a source of waste, but it can be recycled. 3D printing has developed massively, which has led to the development of an impressive number of materials.

Newer Who invented 3D Printing?
Back to list
Older 5 Things to 3D Print and Sell