Yes, what we can say is that we have reached this age of technology in which footwear can be printed. With the development of technology in general, but also of 3D printing, many people began to print more and more crazy ideas that sometimes went viral and necessary at the same time. Shoemakers are ready to give up their conventional tools and start printing shoes in a simpler way and for a higher production.

3D printing has become more and more interesting and used worldwide. The shoes made by 3D printing are made of the same continuous material, but with a greater rigidity towards the sole, which becomes as flexible as possible while it is being created.

It may sound funny when you hear it, but it’s true. Many companies famous all over the world have started producing such shoes made with the help of 3D printers, which have already become a trend and can be accessible by a few lucky people who can try them for the first time.

High-heeled shoes, sneakers and men’s shoes are made in various more normal or extravagant designs to draw the attention to one aspect: 3D printing.
This technology allows to create really extraordinary and creative models, such as shoes whose soles mimic those of animals. 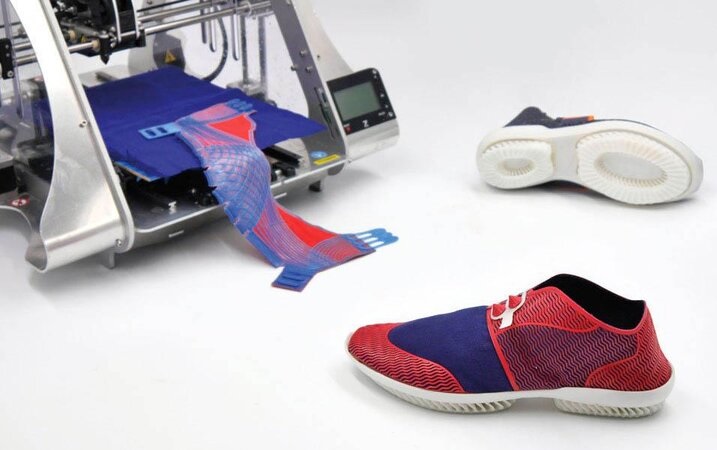 It is important to know in this case that it would be best to use 3D printing when we talk about shoes only for their accessories and for beauty.
Instead, customers of large footwear companies enjoy this opportunity to adapt their style to their personality and have a unique product to stand out from the rest of the world.

Innovation in the sports industry

One of these companies is Adidas, which launched the first model of sneakers with 3D printed midsole in 2017. Since then, the company has continued to innovate and implement technology in its products, thus proving that 3D printing can find a well defined place in the sports footwear industry.

One of the biggest advantages of this technology is the customization and production time. In the case of Adidas, it initially took about 90 minutes to print a single midsole. With the development of technology and materials used, the time was reduced to 20 minutes. A great step forward, still they will continue to innovate and implement new techniques and technologies to further reduce time.

Of course, not only sports shoes can benefit from this technology. An increasing number of fashion designers have begun to design and launch elegant shoes with complex and unique designs.

Fashion designers have become interested in 3D printing because it gives them a much greater freedom of expression, the ability to quickly create exemplary and exceptional prototypes. Their creativity is limitless, so in the near future it will be possible to buy the model online and print it at home on your own 3D printer.

At the same time, customization is also an important factor. When we think of shoes, we think of uniqueness, individuality and self-expression. With the help of this technology we can create shoes that exceed the preset patterns and produce different and customized models for each consumer.

3D printing has countless applications in various industries, but it is becoming more and more powerful in the fashion industry, especially in the footwear sector. Great manufacturers continue to innovate and implement this technology, but fashion designers also use 3D printing to create models full of individuality and character.

Newer What materials are commonly used for 3D printing?
Back to list
Older Is 3D Printing Hard to Learn?